Pharmaceutical fentanyl is a synthetic opioid pain reliever, approved for treating severe pain, typically advanced cancer pain.1 It is 50 to 100 times more potent than morphine. It is prescribed in the form of transdermal patches or lozenges and can be diverted for misuse and abuse in the United States.

However, most recent cases of fentanyl-related harm, overdose, and death in the U.S. are linked to illegally made fentanyl.2 It is sold through illegal drug markets for its heroin-like effect. It is often mixed with heroin and/or cocaine as a combination product—with or without the user’s knowledge—to increase its euphoric effects. 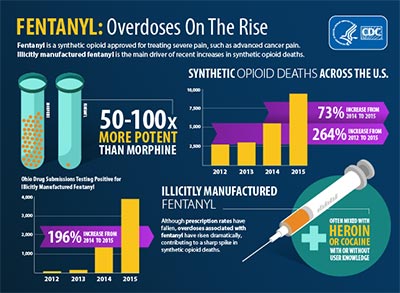 Deaths involving illicitly manufactured fentanyl are on the rise.

Reports from law enforcement indicate that much of the synthetic opioid overdose increase may be due to illegally or illicitly made fentanyl. According to data from the National Forensic Laboratory Information System (NFLIS), confiscations, or seizures, of fentanyl increased by nearly 7 fold from 2012 to 2014. There were 4,585 fentanyl confiscations in 2014.4 This suggests that the sharp rise in fentanyl-related deaths may be due to increased availability of illegally made, non-pharmaceutical fentanyl, and not prescribed fentanyl.

What can be done?

CDC suggests the following actions in response to increases in fentanyl-related overdose deaths:

Expand Use of Naloxone

Naloxone is a safe and effective antidote to opioid-related overdoses, including heroin and fentanyl, and is a critical tool in preventing fatal opioid overdoses.5.6  Depending on state and local laws, this medication can be administered by EMS, law enforcement,7 other drug users,8 or family and friend bystanders who have obtained the medication.9