HOW BUYING DRUGS BECAME AS EASY AS BUYING ICE CREAM. There was a time when drug culture was synonymous with dark alleyways, lethal case studies, and mysterious dealers.

For some young people today, however, the narrative is somewhat different.

Despite the well-known health risks of taking drugs – not to mention the fact that it is illegal – doing so nowadays aligns you with millions of others, for whom buying a gram of cocaine is as easy as ordering a takeaway.

Experts now believe that Londoners can get cocaine delivered faster than pizza thanks to the way smartphones have revolutionised drug use – and the ease doesn’t stop there.

“It’s as easy as going to buy a pint of milk,” said Harry*, a 25-year-old production assistant based in the city.

But it’s not just Londoners that have easy access.

21-year-old Michelle*, who studies at the University of Nottingham, said it was almost too easy for her and her peers to buy drugs as students, given that the local dealer also sold ice cream in a van parked outside the library.

“Everyone bought drugs from him,” she told The Independent.

“It was a bit of a giveaway when we could hear the van’s music chiming away in the middle of winter.

“When it was freezing cold and snowing out, we knew no one was buying ice cream.”

However, even if your local drug dealer isn’t conveniently located in an on-campus snack van, they won’t be hard to find.

“I’ve got numbers for dealers for pretty much all the places I’ve visited around the world,” reveals Tess*, a 24-year-old marketing assistant and university graduate with a first-class degree.

“You literally just have to ask a friend who you know does drugs and ask for a number.

“I got hold of four dealers on a recent holiday in Portugal within five minutes of asking around,” she told The Independent.

While she’s willing to mix and match dealers when she’s abroad, Tess and her friends rely on one particular man when they’re at home in London.

“He’ll come and meet us wherever we are in his car, we’ll hop in, make the exchange and hop out again.

For some young people, drug-taking has become so ingrained in their social circles (“99 per cent of people I know do cocaine or have tried it,” adds Tess) that it’s permeating into their family and work lives too.

“Smoking weed with my mum was weird at first because it skewed how I saw her,” explains 25-year-old Polly*, an apprentice at a top London law firm.

“But once you realise your parents are just human beings it was quite cool,” she told The Independent.

“And also I know I can always be open with her about drugs because she’s okay with it and if I ever had a problem I could go to her.”

27-year-old nursing assistant Sophie* wasn’t at all surprised when, on a work night out, her manager asked if she’d go to the toilet with her and subsequently offered her cocaine.

“It was my first week into the job and we went to the local pub for team drinks, I didn’t think twice of it when the drugs started flowing.”

How did we become so immune to a subculture that had always, quite rightly, been embroiled in social taboos?

Well, it’s not really a subculture anymore: according to the NHS, 2.7 million people in the UK between the ages of 16 and 59 took an illicit drug in 2015/16 – that equates to roughly one in 12 adults.

But even if you don’t take them, there are certain contexts in which the ubiquity of drug-taking is not only tolerated but sometimes encouraged.

There are a number of festivals, nightclubs and bars that are renowned for their lax approach to drugs, making it all too easy to smuggle them in.

“I was nervous about taking drugs into a major UK festival last year,” reveals 24-year-old Lily*.

“So I paid my mate to take them in for me in her underwear, which she duly did.

“When we arrived at the campsite, everyone was talking about what drugs they’d managed to sneak in as if it was a competition.”

Even if you don’t manage to sneak in with your own supply, if drugs are what you’re looking for, it’s very easy to find and take them once you’ve passed through a supposedly “guarded” entrance, explains Polly.

“Pills are quite innocuous and easy to pop in.

“Also, you can always crush some powder and put it in a drink and be sipping on a cocaine-spiked beverage outside with no one noticing.

“I went to quite a heavy drum and bass night at a club on New Year’s Eve; there were no bag checks and almost everyone was taking stuff on the dance floor,” she said.

“I went to a live music bar in Soho last week and noticed a group of girls taking MDMA at the next table, nobody batted an eyelid; it was like they were just drinking G&Ts”.

However, the issue is not that we’ve become so disassociated from drugs that we no longer see them as contemptible – and not to mention illegal – substances, but that hardly any of the young people I spoke to expressed a solid understanding of the potential risks.

“It genuinely never crosses my mind, it’s just so normal to me now,” said Tess.

Well, the glorification of drug-taking across popular culture probably doesn’t do much to wane people off drugs, in fact, if anything it has the opposite effect.

Hit Nineties films like Pulp Fiction, Fear and Loathing in Las Vegas and Dazed and Confused present drug-taking as a seductive rebellion against societal norms, which for some is obviously an appealing concept.

Characters like Mia Wallace and Raoul Duke might be doomed hedonists, but they represent an attractive social transgression that people still aspire towards.

Even Bill Gates attributed his decision to take LSD to his “errant youth” in a 1994 interview with Playboy. 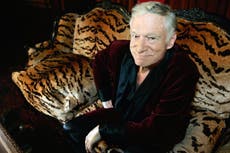 Hugh Hefner’s will has a very particular clause in it

But even if there weren’t hundreds of Wallace/Duke/Keith Richards/Kurt Cobain fan accounts on social media, the idea that the people who take drugs are “cool”, “sexy” and “interesting” remains a perennial ideology that both dilutes and romanticises the potential dangers.

In fact, deaths related to drug misuse are at their highest level since records began.

While Polly insists that she “considers the risks”, it doesn’t deter her from engaging with a smorgasbord of substances on the weekends.

“The truth is that I find drugs really fun and the craving I get for the high outweighs all the low points for me.

“Plus, I’m sensible – I don’t take more than I can handle and I’m always very self-aware when I’m high,” she added.

*Names have been changed